Our second son arrived in early January 2011 as a healthy seven pound nine ounces.  When only a day old, Maximus gave me a big cheeky smile.  Babies don’t usually smile until they’re 6 weeks old; I knew Maxi was special, but one in a trillion, I did not expect.

The only strange thing about Maximus in his early months was how quiet he was; he just seemed so content most of the time.  he almost never cried in the first 6 months of his life.

One day, while breastfeeding Maximus when he was almost 9 months old, I discovered what turned out to be a tumour in the cornea of his right eye.

Many months later, after struggling with steroid eye drops, two steroid injections into the tumour and three general anesthetics, Maximus had thankfully overcome this tumour and he seemed  fine.   In the meantime; at around 10 months his first skin lesion appeared – this led his specialists to diagnose Maximus with a very rare condition called; Juvenile Xanthogranuloma (JXG).  It was only a speculated diagnosis as it was impossible to do a biopsy on the eye tumour.

Between 10 and 18 months, Maxi grew 13 more skin lesions and they appeared in different shapes and sizes all over his body.

At this point, we thought it would be wise to have a dermatologist confirm the JXG prognosis.  I feared that this disease might become systemic, which is uncommon, yet possible.  After a biopsy returned inconclusive results, knowing that these lesions were benign, we were just hopeful that one day they would go away.

However, things took a turn for the worse when Maximus was 18 months old.  I took him to his pediatrician and asked if he thought Maxi was overweight as he seemed heavier.  The doctor questioned me about his diet and concluded that he was just a happy, healthy baby and not to be too concerned.

Nevertheless, I came home that day and decided to monitor this quite sudden weight gain.  I put Maximus on a diet, cutting his lunches completely – just giving him a piece of fruit or yogurt instead.  I also started to cut fats, sugars, salts etc. out of our foods.

I took a series of photos of Maximus and then had him weighed by his maternal health nurse.  I also noticed his motor skills were reverting.  He went from running up steps to crawling up; he also began to fall over a lot for no apparent reason.

After six weeks of this radical diet, I had Maximus weighed again by the maternal health nurse, and to our disbelief, he had gained a massive 2 kg.  I was shocked and took him straight to the emergency department of the children’s hospital.  I had the photographs, which was my visual diary, as well as the maternal health nurse weight chart showing the dramatic change, and was determined not to leave the hospital until my son had been given an MRI of the brain, as I was suspicious of pituitary gland involvement causing Cushing s Disease.

The horrible findings of our first hospital stay are what nightmares are made of.  Maxi’s dad. Edan and I, were taken aside by several doctors and a counsellor to be given the news of the findings of his MRI. They did not find any issues with his pituitary gland, however expressed they were shocked at what they did find.  Maxi had several tumours (type unknown & benign) in the core of his brain, plus several areas of abnormalities, including white and grey matter changes.

Maxi was also found to have unexplainable high blood pressure.  He has required dosage increases every other month because the problem continues to get worse.

To date, Maximus still has no diagnosis.  His many fine specialists have ruled out some very nasty rare diseases, however, the most unnerving thing we’re repeatedly told by doctors, is that there is no other case listed in the world that has any resemblance to what Maximus has presented with.

Maximus is very good and cooperative patient, he has a warm nature that charms his nurses and doctors.  We continue to battle his weight issue with a strict low-salt and low-fat diet and Maxi has a very busy schedule with his physiotherapy, hydrotherapy, visits to his specialists etc.  Due to his unsteadiness and large size, Maximus requires specialised equipment and therapies to assist him with his lack of mobility.  At last count, Maximus has 15 specialists from different fields he checks in with regularly. 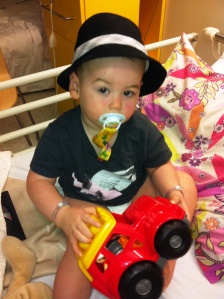 Now; at only 27 months of age Maxi weighs the same as Jacob his 5-year-old brother.  Due to his unsteadiness, he has moments of frustration, fatigue, falls and knocks, but Maxi is a very happy, loving, courageous and determined soul.  When Maxi can’t keep up with other kids playing, he just happily  sits back and watches the games and laughter, we are blessed that both our boys are not the type to sulk about what they can and cannot do – always looking for good time.    This keeps us strong.